The History of Petton Hall

Petton Hall was not always residential properties, and through the years the estate has passed through many hands .

The earliest documented evidence of Petton is in the Doomsday Book. In 1066 it states that two villagers and two small holders with one plough lived in 'Pectone'.  Its Doomsday Book name derived from the old English 'paec-tun' meaning settlement by the peak or hill.

In Doomsday times the manor was held by Robert Pincerna who was possibly an ancestor of the Lord Constantines. Next, the manor was held under the Lord of Montgomery by a family of De Petton. The next Lord of the Manor documented was Sir Peter Newton who, in 1503, was Sheriff of Shropshire.

Following Sir Peter Newton, the next people to acquire Petton was the Chambre family until 1650 when great grandson Henry Chambre went to Ireland. He sold it to Roger Wilbraham who maintained it till it went back to the Chambre family via the second son of Jenkin Chambre of Burlton. He was to marry in 1714 but sadly died at the tender age of 53 when the estate passed to his son John.

John had no surviving male heir to inherit so it was to pass to his widow and daughters - Hannah, Rebecca and Mary. Hannah later bought out her sisters with her husband Edward Maurice also known as Corbett, which she in turn sold on her divorce. Rebecca never married and Mary married John Hill of Hawkstone. Their son became Lord Hill. 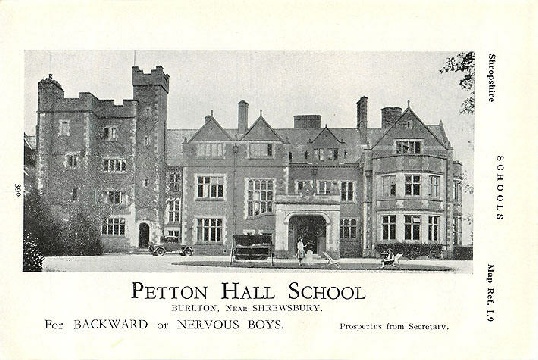 John Sparling bought the estate from Hannah in either 1786 or 1790, who was a wealthy, influential shipping merchant. He was High Sheriff of Lancashire. They were to have twins - Elizabeth and William who were born on 20th September 1777.

William was involved in a trial for murder and took part in one of the last duels to be fought in Britain. The jury was to take just 20 minutes to find William not guilty. Williams's twin, Elizabeth married a West Indian planter called Matthew Abedego of Bulekleys on the island of St. Christopher, with her fortune they bought and built 'The Lyth' near Ellesmere. There were to have no children.

Emma Florence Cunliffe, daughter of John Sparling inherited the Old Petton Hall at the age of 19 in 1867. A strong woman who ruled like a monarch on the estate, her word was law because usually people's livelihoods depended on her. Mrs Cunliffe was to arrange for the old Hall to be pulled down to make way for her more imposing new house in around 1892, which was positioned close to the original Hall.

The access approach, the drive and gardens were all rearranged. The Kitchen gardens and vineries were extensive and highly productive at this time.

Mrs Cunliffe had started to sell off parts of the estate in 1920, under instruction of her husband Captain Ellis Brooke Cunliffe. She died on 13th May 1925 and was succeeded by her son Ellis, whom died only one month later in June 1925. He was unmarried, so the hall was to pass to his brother William Noel their forth and only remaining son.

The estate was sold in 1928 in 11 lots with the Hall being Lot 1. The Hall was bought by Mr Parry and his wife Isabel who set up a private Kindergarten and Preparatory School for boys with well off parents whose children were delicate with special needs, or as described in Kelly's Directory “ for nervous and backward boys”. Isabel died in 1933 and the school was sold for a reputed £26,000 plus the same amount again for fixtures and fittings to Shropshire Education authority in 1947.

It was a residential, seven day special boarding school for boys and girls were admitted as day pupils in 1976 and became a five day residential co-educational school in 1977 with about 30 mixed day pupils. It was closed as a school in July 1990, when it stood empty for many years. Petton Hall was finally sold in 1996 with planning permission for 11 individual units, for the purchasers to develop themselves.